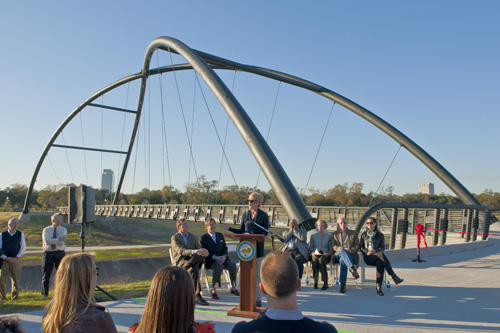 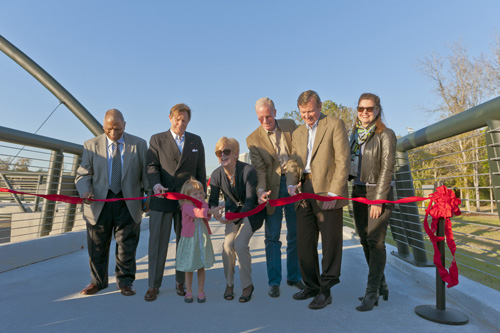 The bridge (near 6530 1/2 Almeda Road, Houston, 77021) connects to a Brays Bayou pathway, part of the Harris County Flood Control District’s $535 million Project Brays- that will eventually create hike and bike trails from Barker’s Reservoir to the Houston Ship Channel. Thanks to the Bill Coats Memorial Bike Bridge, bikers can now cruise from Hermann Park to almost 35 miles of trails soon to be completed along Brays Bayou.
“Bill Coats was a leader with a vision, and he was famous for his ability to solve complex problems,” says Pat Gaas, Director at Coats Rose. “Bill White asked Bill Coats to facilitate the release of long delayed federal funding to pay for bike trails. Once that was done, Bill urged that the project be staffed with both an architect and an engineer so the finished bridge would be both practical and pleasing to the eye. That was Bill, always looking for a way improve the community.”
The Bill Coats Bridge is the recent winner of the prestigious Landmark Award in Keep Houston Beautiful 2012 Mayor’s Proud Partners competition. It has been made possible thanks to a federal bikeways program, the Texas Department of Transportation, the City of Houston, Houston Parks and Recreation Department, and Public Works and Engineering in conjunction with Hermann Park Conservancy.
Bill Coats served as a Director at Coats Rose, a member of the firm’s Executive Committee and head of the Firm’s Construction/Surety Section. During his years in the legal field, Coats enjoyed unparalleled success through hard work, dedication and an astute business sense. Because of his leadership and innovation Coats Rose has grown from a single location to six offices with practice groups spanning areas never contemplated at the time of the firm’s founding in 1981.
Bill Coats died in 2010 at the age of 69. He was a caring and devoted community leader who believed quality of life was just as important to Houstonians as quality of work. Coats co-founded Trees for Houston and the Hermann Park Conservancy and worked tirelessly for groups like Scenic Houston, the Houston Community College Foundation and Quality of Life.
Coats Rose is a full service business transaction and litigation law firm based in Houston, Texas. For more than 25 years, Coats Rose attorneys have worked with clients in construction/surety law, real estate law, commercial litigation of all types, municipal law, public finance, affordable housing, insurance law, labor and employment law, and governmental relations. Coats Rose is comprised of more than 90 attorneys, with offices in Houston, Clear Lake, Dallas, Austin, San Antonio, and New Orleans.