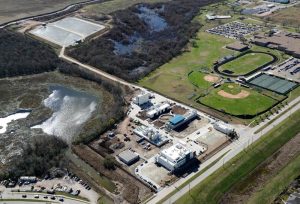 The City of Sugar Land’s new $69 million surface water treatment plant near the intersection of Voss and Burney Road in the Gannoway Lake area is operational thanks to the hard work of Coats Rose Director Tom Barber.
Barber organized the legal needs for the project on behalf of the City of Sugar Land. The plant has the distinction of the being the largest capital improvement project ever completed by the City. Construction began in June 2011, and work included an administration/membrane building, chemical building, maintenance building, sludge dewatering building and various treatment units.
The plant was built to meet the Fort Bend Subsidence District’s state mandate that 30 percent of the City’s water supply must come from a non-groundwater source, a requirement intended to reduce subsidence that contributes to flooding in the area. Subsidence literally means the sinking of land surface. In the greater Houston area, subsidence is largely caused by pumping groundwater from aquifers, which results in the compression of many layers of clay beneath the land surface.
Water suppliers who produce more than 10 million gallons of water per year must establish a plan resulting in a 30 percent reduction of groundwater consumption by 2014 and 60 percent by 2025.
The surface water treatment plant will supply 9 million gallons per day with the capacity to expand to 22 million gallons per day in the future. The City has obtained water rights in Oyster Creek to supply the plant.
Treated surface water leaving the plant will be pumped to two existing groundwater plants and mixed with treated groundwater before entering the citywide distribution system.
“Mixing the two types of water before distribution ensures our customers will receive the same high quality, superior tasting drinking water they are accustomed to having flow from the tap,” said Assistant Director of Water Utilities Jessie Li.
The City has seven groundwater plants, but the surface water treatment plant will be the first plant in the City’s potable water system that treats raw surface water to drinking water standards.